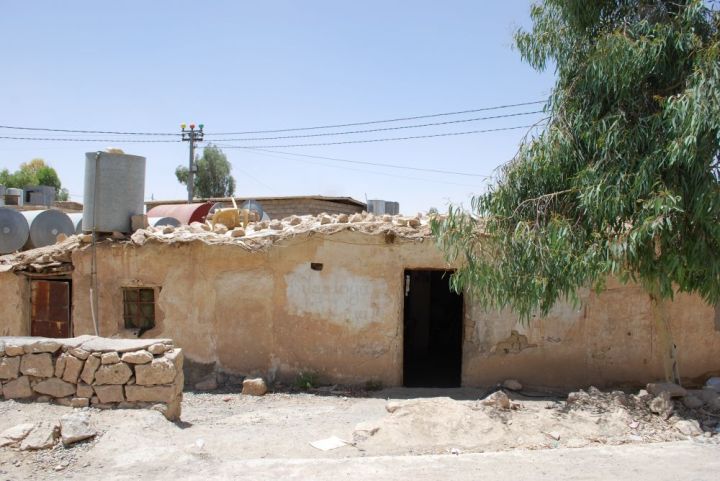 The boy is stirred by the sound of bickering.

His eyes do not open, though he can tell that it is morning. He lies still. His ears translate the scene to his brain which creates the imagery. His mind has already mapped out this austere room; the single mattress, the bare concrete walls, the dusty floor, the paneless window. The entire one-story home made of concrete is etched into his memory like the face of a loved one. Like the loved ones who argue outside. He needn’t open his eyes. Soon he will have to, but for now he keeps them shut.

He’s curled up on the thin mattress, sheltered under a ragged Najafi abaya, which he found while wandering along the Tigris a few days earlier with his friend, Aban. He thought about all the possible prominent figures who may have worn such a luxurious cloak, hand-woven from refined wool; an oil-rich sheikh, a prominent politician, a visiting emissary. Most abaya weavers had stopped working after the US invasion of 2003, and the market was flooded by foreign goods not long after Hussein’s trade embargoes were lifted. His abaya was an original—however tattered it may be now—and had it been brand new it would have been the most expensive thing he’d held in his hands.

The bickering is between husband and wife. Nothing more natural, nothing more human. In his abaya cocoon he brings his knees to his chest. He feels safe here. Here he feels inviolate despite the inimical nature of the world outside. He takes a deep breath, and as he exhales as quietly as a gentle breeze, he hears a series of distant thuds, one after another, and then the journeying cacophony of chaos.

And the bickering ends.

Some of Thomas Sowell's best and most well-known works include Economic Facts and Fallacies; A Conflict of Visions: Ideological Origins of Political Struggles; The Vision of the Anointed: Self-Congratulation As a Basis for Social Policy; Black Rednecks and White Liberals; Basic Economics: A Citizen's Guide to the Economy; and Intellectuals and Society.
I've a feeling I'm not the only one in dire need of a haircut. But let's not go there...
Maria's new music vid – directed by the legend himself @paultuckermaxdodd – premieres on Hot Press's website today at 12pm. Head over to the site and check it out. And you can check her out on Spotify too, of course. Proud of you @marlaemusix x
Next in non-fiction: One of the greatest minds of the 20th century, F.A. Hayek (no relation to Selma).
There they are now.
Writing action? Read action 💥